The last time I saw Carlos Mencia he was a lot heavier. He told me he lost about 70 pounds, but fortunately he’s as funny as ever, if not funnier! It proves that weight doesn’t make you funny. Look at Lisa Lampanelli! A hundred pounds lighter and she kills it every time! 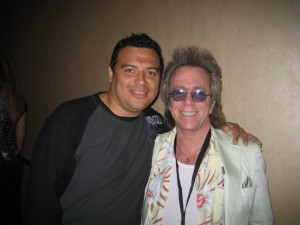 Jeffrey Gurian of Comedy Matters TV with a heavier Carlos Mencia back in 2007 at a Latino Comedy Festival in LA!

So when I heard that Carlos was hosting the AXS TV special at Gotham, one of the “Gotham Comedy Live” series produced by Killer Bunny Entertainment’s Dave Goldberg and Rob Cea, I knew I had to get down there.

I let Carlos know to expect me, and we sat down together in the green room during the time between rehearsal and the actual show. He started by saying, “the last time you saw me I was a lot heavier!” Which led into a discussion I enjoy, about empowerment! Most people are too afraid to change their lives, even if they’re miserable, because at least they know who they are while being miserable. But if they radically change their lives, who will they be? 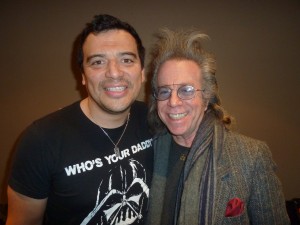 Jeffrey Gurian of Comedy Matters TV with the new and improved Carlos Mencia at Gotham Comedy Club in NYC!

That’s a scary concept for a lot of people. In my own life I was a very severe stutterer until I was in my 20’s. I couldn’t even say my name which is a common problem for stutterers. I realized that when I was in a room by myself I could speak perfectly. That told me that there was really nothing wrong with me. It took the next two or three years for me to make progress with my speech and free myself from the bondage of stuttering, but it’s an accomplishment that changed my life.

Carlos came from Honduras, as the 17th of 18 kids, so when he started doing well enough to afford having an appetizer in restaurants, he ordered them just because he could! Then a friend of his who had Diabetes told him he was in danger of losing a toe, and made the observation that when you see old people in their 80’s or 90’s they’re NEVER fat! And that’s true. That realization hit home for Carlos and he got serious about losing weight.

He looks and feels like a new person! Check out what he had to say in the video we shot:

Carlos’s Gotham Comedy Live show was one of the best I’ve seen, because of the energy he brought to it. Angelo Lozada was the MC and he’s always funny and reliable, which is why he gets to host a lot. He said, ” You know your girlfriend talks too much when she wakes up in the morning and her first words are, ” And then, ….” 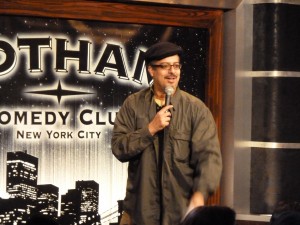 Angelo Lozada warming up the crowd for Carlos Mencia at Gotham Comedy Club!

Jon Fish was up next and said he wishes his Dad had given him the advice, “When you realize you’re going bald, turn to whoever you’re with at the time and propose!”

He uses Hugh Hefner as an inspiration for dating younger women. He said that Hugh, 86, recently married a girl who was 26. A 60 year difference. That’s an entire old person between them!

Hadiyah Robinson was up next and was also very funny. She talked about not being able to have a gay guy as a roommate. She said she couldn’t live with a guy who didn’t want to have sex with her! 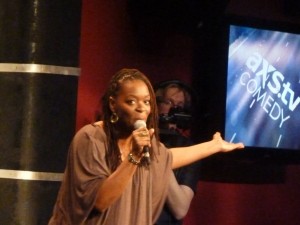 Hadiyah Robinson “bringin’ it” to the crowd at Gotham Comedy Club!

Most people in comedy have had the experience of meeting someone who tells them a family member is also very funny, and is starting out in comedy. Usually it turns out to be nothing. They were funny once at a family party or something. In the particular case of which I speak, the “someone” was the super of my building, who told me many times about his step-son who was performing comedy. I had no idea it was going to turn out to be Mark DeMayo, who happens to be very, very funny! He’s also an ex-NYPD cop, which gives him lots of relatable material. 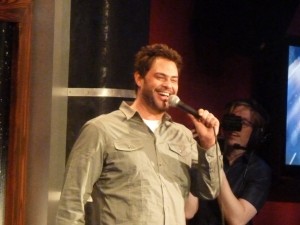 When people ask him what he does now since he retired, he tells them he smokes pot! He got an extended applause break when he showed the audience how he used to bang on doors in the projects in order to get people to come to the door. He banged on them as if they were conga drums, and he was banging out a Latin beat! The audience pictured some guy dancing his way to the door to be arrested! Really funny visual, but Mark told me afterwards that the length of the applause made him have to leave out a joke. A lot of comics would like to have that problem!

Carlos liked him so much that at the end of the show he asked him to do an extra bit! Mark was there with his manager from Cringe Humor Cris Italia, who with his partners Paul Italia, Patrick Milligan and Dave Kimowitz own the super cool new comedy club/restaurant called The Stand! If you haven’t been there yet you must check it out on 20th Street and 3rd Avenue in NYC! And make sure to tell them I sent you! (LOL)

Jason Andors was also on the line-up and admitted that he cheated on his last girlfriend which he felt must have been Karma. He wondered, “what did she do to deserve that kind of treatment?” 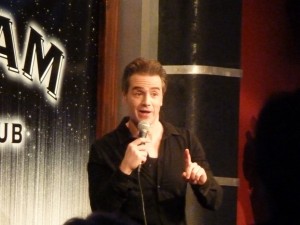 He also told about this Latina chick he was dating who would yell at him in public, so to counteract that he’d take out a script and make believe they were rehearsing a scene for a movie. Jason has a background in ballet, which he uses so effectively onstage in the physical part of his act, and is one of the best pop-lockers I’ve ever seen. He’s often the only White comic performing to a Black audience, and I can see why his material would go over so well.

But Carlos was amazing. He was so funny, he commented himself that he even wasted jokes during the commercial breaks when only the club audience would hear them, as opposed to the TV audience at home. He talked about so many diverse topics like:

Oscar Pistorius – You have no legs. Why are you shooting the one chick that was willing to have sex with you? She’s probably up in heaven now saying, ” I should have been f***king a guy with no arms!” (Did I mention that this show was “Live” with no censorship???)

Hurricane Sandy – In this country we called it a “Super Storm”. In India they simply say, ” A wave came and everyone died!”

Camping – Camping is for rich people who want to pretend to be homeless. Most regular people don’t even understand the concept. When I explained it to my gardener, he told me that his family has been “camping” for hundreds of years!

And at the end of the high energy show they all came out to take a bow! 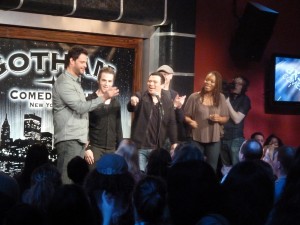 Carlos is a super guy who deserves all of his success. He alluded to working on a concept for a new TV show and personally I would love to see that! I’d love even more to be on it! (LOL) 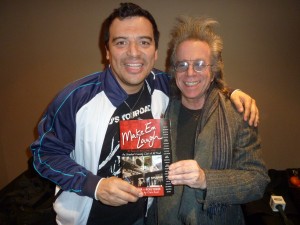