Every Thursday night for about the last three months, Killer Bunny Entertainment has been filming a live comedy show at Gotham Comedy Club for Mark Cuban and Ryan Seacrest’s AXS TV channel!

Every week they have a great host and I’ve been down there to shoot videos for Comedy Matters TV with several of them like T.J. Miller, Susie Essman, and Carlos Mencia, but when I heard that Jim Norton would be hosting the last show of the season I was determined to get down there to see him!

Not only because he’s so funny but because I had been trying to set up an interview with Jim since the previous July when his last CD “Please Be Offended” first came out. 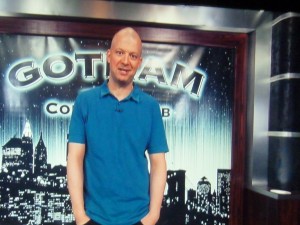 Jonathan Brandstein’s office and I were working together to set it up, but Jim was so busy that it never happened. And then I ran into Jim in Montreal at the 30th annual Just for Laughs Festival where I was actually shooting for the festival, and it still didn’t happen. We ran past each other in the lobby where I was just able to yell out a quick “hello” and that I had been trying to get a hold of him. I shot 40 video interviews over those three days, but no Jim Norton.

Jim did a great show at Gotham, and the fun thing is that it’s live. For some comics that might be daunting, but Jim’s been on the radio with Opie and Anthony so long doing live stuff every day, that for him it’s nothing.

It’s also no holds barred. Anything goes. So Jim got to talk about one of his favorite subjects, … hookers! And how in Vegas when he called for a hooker they told him it would cost $3,000. And he was wondering how long she stayed for that, … forever? For three thousand dollars, does he get to cut off her head and keep it? 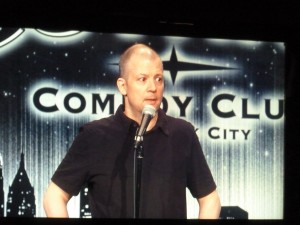 I don’t think that was really a desire of his, just a thought that briefly ran through his mind.

Jim’s observations are also right on, like when he said if you’re clearing your throat you sound like a liar. No matter what you’re saying, once you clear your throat in the middle of saying it, you automatically sound like a liar. In a way, and I mean this only as a compliment, he and Colin Quinn work very similarly. He actually imitated Colin’s voice and sounded just like him.

Drew Fraser warmed up the crowd and the man has a way of getting the audience really pumped. It’s a special talent to be able to host a show, and Drew’s got it! 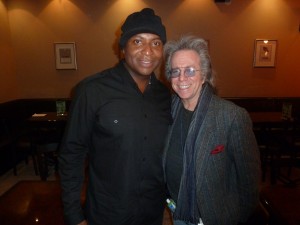 Jeffrey Gurian of Comedy Matters TV with Drew Fraser who not only warmed up the crowd, but heated them up to a boil! (LOL)

Louis Katz was first up on the show and was his usual funny self. He said he spent most of the day balding. He then went on to explain to the audience that with his look he can’t wear a hat, because with his glasses and a hat he’s a fake moustache away from looking like he’s in disguise! 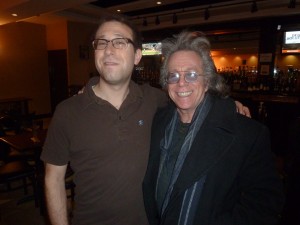 Jeffrey Gurian of Comedy Matters TV with Louis Katz right after he killed it on Gotham Comedy Live!

He talked about someone who had such bad breath he wanted to tell them, “You know there’s no such thing as street chocolate. You’ve been eating dog shit!”

Marina Franklin was up next and I love seeing Marina perform. Especially when she talks about coming from Chicago and wonders if she and not Michelle could have been The First Lady. But then reality kicks in and she realizes she ain’t no lady! She could have been the “First Ho!”

In talking about her dating life and her recent white boyfriend she said she doesn’t just date white guys exclusively, but the economy was bad!

Colin Jost, one of the head writers up at SNL was next, and he too is reliably funny. I always enjoy his performance and the tone with which he delivers his material, which is so important to a comic. He talked about song lyrics and how in one popular song they changed the lyrics to make them family friendly and have a guy apologizing to a girl by saying, ” I don’t mean to be rude but tonight I’m loving you!” He went on to explain that that’s nothing to apologize for. It’s one of the nicest things you can say to a person.

He also advised couples that if one of you loses a ton of weight you both better lose a ton of weight because it’s very awkward to see them and say, ” Mark, you look great, you must have lost 50 pounds! And Janet, ……………”

And closing the show was the always funny and sexy Lynne Koplitz, who openly says she’s 45 years old and it’s over! She calls herself Auntie Lynne and gives advice to the younger women in the audience like not to smile too much or you get laugh lines. Twenty years from now you’ll be asking yourself, what was so fuckin’ funny?

She goes for younger guys who she can control, and ruled out dating one older guy by saying ” You’re cute, but you probably have opinions!”

After the show, which got picked up for a second season, and which will be starting in May, I went down to the green room to have a long awaited chat with Jim Norton. It was well worth the wait, and here it is: