Jay Pharoah Does A Surprise Set At The Comic Strip

It goes without saying that if you’re a cast member of SNL that you have to be great at doing characters, but Jay Pharoah is in a class by himself. And he stopped by The Comic Strip to prove it! He came in with Colin Jost, who’s a writer on SNL and is a regular performer at The Strip. I would think that all young Black comics would want to perform on the stage that launched Eddie Murphy and Chris Rock. 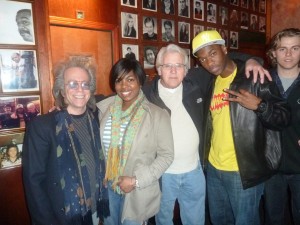 Jay came in with his manager/sister Shayna,(I hope that’s how she spells it! LOL), and his agent and we all sat up in the balcony with owner Richie Tienken to enjoy Jay’s set. The packed audience was surprised and thrilled, and Jay did about 30 minutes. 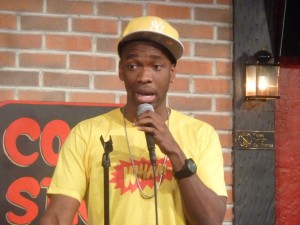 Jay Pharoah from SNL onstage at The Comic Strip!

His impersonations of Obama, Will Smith, and Denzel Washington absolutely killed. Shayna kept the family name Farrow, but I like the way Jay spells it, cause it carries the power of ancient Egypt.

The cool thing about Jay is that he’s as humble as he is talented. I hope to be shooting a video with him real soon for Comedy Matters TV! Stay tuned! 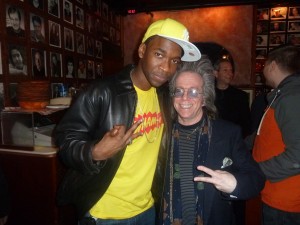