I first met Sebastian on the Kandy Kruise, a special charity cruise from Cali to Mexico that had 500 guys and 1500 girls. All the girls were from Playboy, Penthouse, Maxim, … you get the idea. It was a very quiet, relaxing cruise! (LOL) He was performing with Cort McKown from Playboy Comedy. 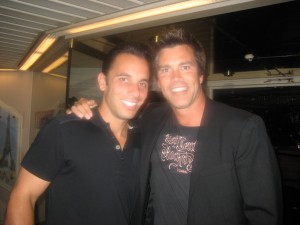 Sebastian Maniscalco and Cort McKown on the Kandy Cruise back in 2007!

Then I saw him again with Russell Peters on Russell’s Best of the Fest show in Montreal at the Just for Laughs Festival, and ran into him again when I was out in Cali doing Nick Kroll’s upcoming show on Comedy Central.

This week, Sebastian has been having sold out shows at The Gotham Comedy Club as part of the NY Comedy Festival, and if you have to ask “Sebastian who” you’re not in “the know”! ( To use an expression from 1810! LOL) One name is all he needs like Cher, Lindsay, Brad, … very rare for a comedian! 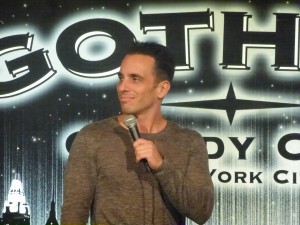 Sebastian, killing it onstage at Gotham Comedy Club in one of his 6 sold-out shows for the NY Comedy Festival!

He’s lucky he’s so well known cause “Sebastian Maniscalco” is not fitting on a marquee that easily! I popped in to see him last night and not only was my usual table filled, but the entire place was so packed, I wound up standing, which is something I don’t do. When I see a show at Gotham I’m popping up every few minutes to shoot photos, so I cant be wedged into a seat where I have to disturb other customers every time I get up.

Gotham is built for filming and shooting photos as they have a private passageway in the back of the room where you can shoot through glass. Sebastian’s show was so good, I made the decision to stand. So I positioned myself back there and took all the shots I needed.

First the show was MC’ed by Angelo Lozada, who I think is one of the best hosts out there today. There’s a special thing about being a host. Besides having great material, you have to be able to warm up the audience with some crowd work, and get people in the mood for a show. Angelo is very strong when it comes to that, and he knows how to put people in their place very gently but effectively. 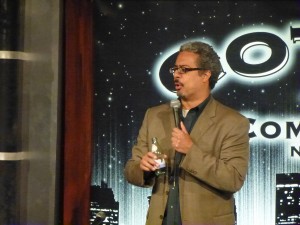 Mark Normand was also on the show. His lines are very clever, and the crowd really liked him. 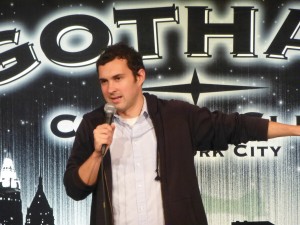 But let me see if I can describe what makes Sebastian so special. First of all he had his crowd there. They were there for HIM, and to that there was no doubt! His strength is not only his material, but his physicality. He embodies whatever person it is he’s talking about whether it be male of female, and moves constantly around the stage.

Somehow he manages to create a visual image of what he’s telling you, and with his sculptured and manicured look, when he does his “Italian thing” you could almost see John Travolta in his Saturday Night Fever days, if he had been a stand-up comic. And I mean that with the greatest respect, not as a slam in any way, shape or form!

When Sebastian talks about how in the old days you’d pick up a girl at a club, not only by your approach, but with your dancing, he totally nails it, and his moves are great! I was standing with Chris Mazzilli, the owner of the club and he totally agreed with me.

Sebastian said his tough Italian father never bought him and his siblings things. Instead he told then what kids owned the things they wanted, and where they lived, and left the rest up to them. “You know that dog you want? A kid five blocks away has that dog. That’s your dog.”

And his father always wanted to haggle over a deal. The dentist told him he needed a crown that cost 800 bucks. The father jumped out of the dentist chair and said, ” I got a crown guy. If I pay you cash, how much???” and Sebastian makes the “paying cash hand moves” that we’ve all experienced, with guys like that!

He talks about how badly we’re treated by airline personnel when going through the airport and how the only time they’re happy is when your bag is over the weight limit. “You’re three pounds over” the woman told him. “You have to take out three pounds of clothing.” He said,”And where am I supposed to put it?” And she said, ” In your carry-on!” And he wanted to explode, ” It’s still going on the plane! What’s the difference if it’s inside my luggage or in the overhead compartment? It’s the same three pounds!”

That observation got him an extended applause break of which there were many. And that’s why I put up with standing through the entire show, with no food or drinks. It was that good. And what’s really nice is that he told the entire audience to come and meet him afterwards to take photos if they wanted to. That’s a guy who really appreciates his audience!

I may actually go back to see him again tonight at 8 P.M. I just hope I don’t have to stand again! (LOL)

He’s also doing a new podcast with the very funny Pete Correale, and I can’t wait to check that out as well! 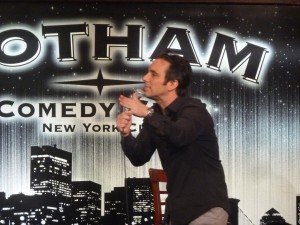 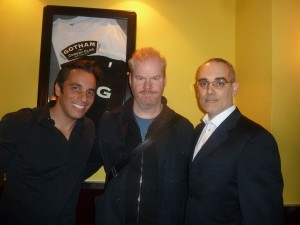 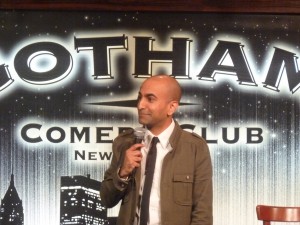 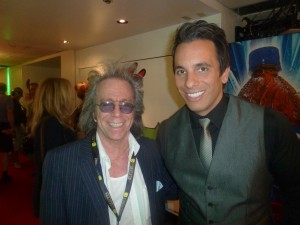 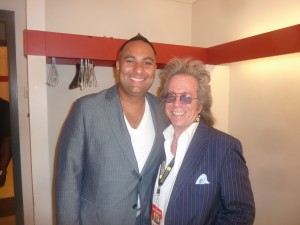