Barry Sobel Is Doing It! In Two Different Shows!!!

There’s only one Barry Sobel and those of you who know him know what I mean. In a world of unique characters, like you find in the world of comedy, Barry Sobel stands out. Barry claims he’s back to save The Universe with a brand new type of entertainment, Barry Sobel’s “The Skype Show.”

He’s hosting a live stand-up comedy show mixed with special appearances by comedians from all around the world SKYPING IN, so grab your Firewire cables and hold onto your seats for an inter-galactic ride, with Barry Sobel as the Mission Commander! 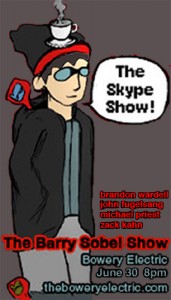 The Skype Show, this Saturday June 30th at Bowery Electric!

John Fugelsang, a dear old friend of mine, whose CD on I-Tunes is currently numero uno,(#1 for all of you who are not fluent in Espanol!) performs onstage at Bowery. And comedy powerhouse Brandon Wardell, SKYPES IN, from his basement in DC. ( Where he’s been hiding for years! LOLOL) Plus many more! As Barry describes it, each show will be “an amazing one-time only experience!”

This will be the premiere show for Barry, who is an “Artist in Residence” in the new comedy room at Bowery Electric, which I think means he lives there! (LOL) Future dates will be added.

Barry currently stars on “The 3 Minute Talk Show with Barry Sobel.” Created by Barry and produced by Tom Hanks and Playtone, it is everything you have ever seen in a late night talk show, all in three minutes. It can be seen on Hulu.

Barry has had a fascinating background with tons of credits. Originally emerging from the San Francisco comedy scene, he was a favorite of rock impresario Bill Graham who invited him to perform at “The US Festival,” making Barry, at the time, the comedian to perform in front of the largest live audience in the history of comedy.(There were at least 6 or 7 people there! LOL)

Barry changed the face of stand-up comedy, ( like a comedic plastic surgeon!) with his ‘Beastie Boys’ Rap, and his homage to James Brown and Bruce Springsteen, “I Can’t Do No More!”

Introduced at “Showtime at the Apollo,” by hosts The Beastie Boys and Run DMC, Barry was the first comedian to ever rap onstage…and he received a standing ovation. (If it had been a Jewish audience he would have received a “standing oy-vation! LOL) 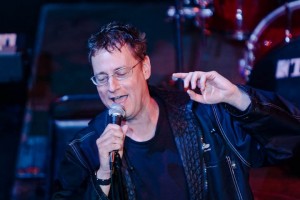 Barry Sobel killing it onstage way back in 2010! ( He still looks exactly the same!)

But it was Barry’s career breaking performances on “The Tonight Show with Johnny Carson,” that made him a force to be reckoned with, to use an expression from The Old West!

Barry has appeared on HBO with Rodney Dangerfield, (the first major star I ever wrote for back in 1810), Eddie Murphy, John Candy and Tom Hanks, and has starred in his own HBO special, “I CAN’T DO NO MORE.”

Barry became sort of a pop culture icon when he joined up with the “Nerds” starring and rapping in “Revenge of the Nerds II.” NBC President Brandon Tartikoff championed Barry’s career and cast him on the NBC hit sitcom “227.”

Barry has appeared in many movies, including “Blind Date,” “Doc Hollywood,” “I Love Trouble,” and “BAPS,” and starred in the cult classic “Martians Go Home.” He was handpicked to work on the movie “Punchline,” the film where Tom Hanks tried out some of his material at The Comic Strip, and he actually wrote Tom’s material and coached him on how to perform. They’ve been close ever since.

Barry’s TV career started with an appearance on “Family Ties” and went to include “The Ellen Burstyn Show,” “Bridges to Cross,” and “VH1’s Vinyl Justice.” He has had recurring roles on “Dave’s World,” “The Parenthood,” and wrote for and did voices for the acclaimed cartoon, “The Boondocks.”

He even wound up playing himself on an episode of “21 Jump Street.” ( I just did that on Nick Kroll’s new show for Comedy Central, and it’s really fun, and a great honor!)

Barry guest VJ’d for years on MTV, and has been in many shows on Comedy Central having appeared on “Dr. Katz,” “The A-List,” “Comics Only,” and “The Chocolate News.” He even starred in his own Comedy Central commercial with his Mom.

He’s appeared on numerous talk shows, including “The Tonight Show,” “Oprah,” “Regis,” and “The Today Show” and if you hurry down to Bowery Electric you’ll be able to verify all this for yourselves by cornering him and asking him a million questions!

As a writer, his credits include “The MTV Movie Awards,” “The MTV VMAs,” “The Boondocks,” “Nick Swardson’s Funtime,” and Saturday Night Live, for which he received an Emmy nomination. Barry has worked for years with Jimmy Fallon, who made his first TV appearance on “The Barry Sobel Show” on Comedy Central.
Barry is currently in pre-production on season two of “The 3 Minute Talk Show,” and is developing an animated project with Tom Hanks, Cartoon03.

Then on Thursdays at 9, starting this Thursday, June 28th Barry is doing a show called “These Jokes Aren’t 4 Everybody-Just The Sexy People” and it will be at Revision Lounge and Gallery! (Comedy just isn’t funny unless there’s a gallery! That is at 219 Avenue B in NYC in case you plan on coming in from Europe or Asia for this event!

I know I’ll be there and I hope to see you there as well! Then I can get some more photos to add to this column! (LOL)