Liv Tyler A Femme Fatale In "The Ledge"

I’ve ALWAYS been a fan of Liv Tyler. She’s elegant, great to look at, really talented, and even more impressive, exceptionally sweet and down to earth. If you want to fall in love with her immediately, watch her in Bernardo Bertolucci’s “Stealing Beauty,” which was her first lead role, back in 1996. Her character, an American teenager named Lucy Harmon loses her Mom to suicide, and she goes to Italy to connect with people who knew her Mom, and also to lose her virginity. 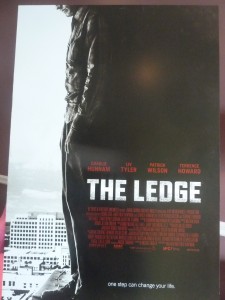 The last time I was in her company was when she was a teenager. I thought she was 16, but she says she could actually have been 13! Don’t get nervous, it was at a party in honor of Peter Max, the world-famous artist, who is a very dear friend of mine for many years. Peter actually once “psychedelicized” ( if there even IS such a word! LOL) the outside of an entire airplane with his artwork, was the foremost psychedelic artist of the 60’s, and has had his work exhibited at the White House. 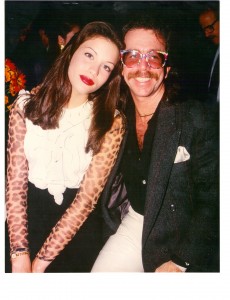 Jeffrey Gurian, at a party for Peter Max, with a young, and lovely Liv Tyler who claims she might have only been 13 at the time! Jeffrey thinks she was 16. Either way she was already a knockout! (LOL)

I have an original Peter Max that he drew for me on a dinner napkin many years ago when he attended a party for a film I wrote, with Michael Ian Black of “Ed” fame, and Ben Garant from MTV’s The State, and Reno 911. It was the first interactive film ever made, by Sony, where the audience pressed buttons that were installed at their seats to change the course of the movie. It was called “I’m Your Man”, and was shown at the Sony Theatre on 19th Street and Broadway in Manhattan. 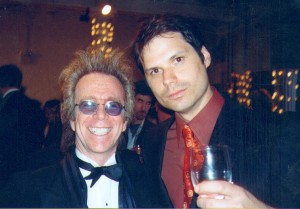 Jeffrey Gurian with Michael Ian Black at a black tie affair, where Black was wearing a red tie!!! (LOL)

So at the party where I first met Liv, I remember being there with Jon Lovitz, who was probably still on SNL in those years, and someone brought me over to meet Liv.

As you can see in the photo above, I was in my Elton John stage at the time, complete with flowered glasses! I even had my 80’s moustache, which I now keep in my wallet just in case I ever need it! (LOL)

It wasn’t until the writing of this post that I realized that I also had a photo of Peter Max and I from that same night, which you can see below. Same outfit, same flowered glasses, and same moustache! 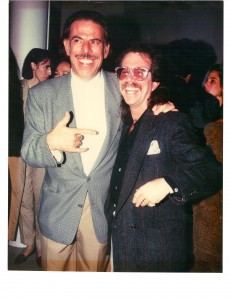 Jeffrey Gurian with the world-famous artist Peter Max at the party where he first met Liv Tyler!

Some time after, Peter attended a party in my honor for the “I’m Your Man” film I mentioned above. The party was also attended by celebs like Robin Leach, energy/exercise guru High Voltage, legendary music producer Nile Rogers, and baseball legend Keith Hernandez.

I can’t believe I found that photo of me with Peter as well. I had progressed to red glasses from the flowered glasses but I still insisted on having that moustache.

In this photo it looks like I was in good company since both Peter and Nile brought their moustaches out for the evening as well! (LOL) 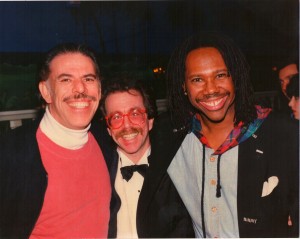 (L-R) Peter Max, Jeffrey Gurian, and Nile Rogers at the party for Jeffrey's film "I'm Your Man" at Country Club, many years ago! All sporting very hip moustaches for the time!

So anyway, when I got invited to interview Liv for her new film “The Ledge” written and directed by Matthew Chapman, and co-starring award-winning actor Patrick Wilson, who will be starring in a new TV show on CBS, a drama called ” A Gifted Man”, Charlie ( Sons of Anarchy) Hunnam who reminds me somewhat of Brad Pitt, and Terrence (Hustle and Flow) Howard, I jumped at the chance. 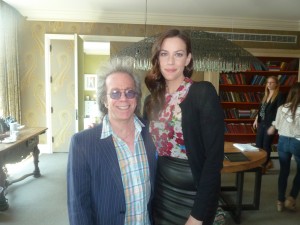 Jeffrey Gurian with the amazingly talented Liv Tyler, ( in her 6 inch heels) at The Crosby Hotel for her new film "The Ledge"!

The movie, which created a lot of buzz at Sundance this year, is a thriller/love triangle, and starts out with Charlie Hunnam whose character is named Gavin, riding to work on the bus when he spots a beautiful young girl (Tyler) and they exchange smiles. Imagine his surprise when he shows up at work as the manager of a hotel, and she comes in to apply for a job. Her character’s name is Shana, which is very fitting, as I told Liv during the interview because Shana means “Beautiful” in Yiddish. Of course Gavin hires her immediately, but gives her a job as a chambermaid.

They even live in the same building. Lots of coincidences here. As a writer myself, I might have questioned that as I wrote it, but it just shows you that when you have a good script, the audience goes with the story and doesn’t get hung up on little things like that. Liv (Shana) is married to Patrick’s character Joe, who we soon find out is a Bible-thumping evangelical nut.

He and Shana knock on Gavin’s door so he can meet his wife’s new boss, and after meeting Gavin and his gay roommate Chris and inviting them both in for dinner, he begins berating them both for being gay. Shana is hiding a secret past and is in a loveless marriage out of gratitude for having been saved. As a matter of fact, all three of these main characters have had some serious personal trauma that they’re dealing with.

Gavin lost his little girl in a car accident, and thinks he is an atheist. I say it that way for a reason! It’s inevitable that he and Shana are drawn to each other. It’s done in such a subtle way that there are really no explicit sex scenes. It just shows that you don’t need that kind of stuff to have a great film. However, if I was Charlie Hunnam, I would have been disappointed! (LOL)

When Gavin winds up on a ledge high above the city and says he must jump off at noon in order to save Shana’s life, Terrence Howard, as “Hollis”, is the cop who tries to talk him down. He is also dealing with the trauma of finding out accidentally that very same day, that his kids were not his kids.

I got to interview not only Liv, but also Patrick and Matthew Chapman. I had to tell Patrick how relieved I was to see what a nice, normal looking guy he was because he played such a scary looking guy in the film. He really captured the intensity of his character’s insanity, and when I asked him if he carried that character with him when he left the set, he told me that having his wife and kids on set with him, helped him remain sane, and leave the “Joe” character behind. 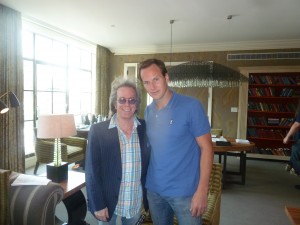 Jeffrey Gurian with a very handsome and sane looking Patrick Wilson at The Crosby Hotel for The Ledge press event!

And Liv was so excited about seeing her old photo with me that we took a new one holding the old one, and she made me promise to send it to her which I’m doing right after I post this! (LOL)
She insists she was only 13 which is a scary thought when you see how beautiful and mature she looks! ( I know I remember being told she was 16, but she should know better! She probably remembers the outfit! LOL) What’s amazing is that she remembers that night at all. It’s funny what sticks out in people’s minds. 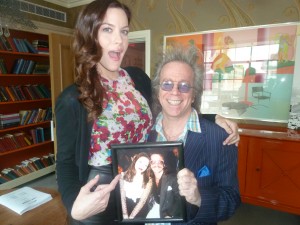 An excited Liv Tyler pointing to her old self in a photo with Jeffrey Gurian taken when she was just a teen!

Check out the clip of Liv, Patrick and Matthew right here! 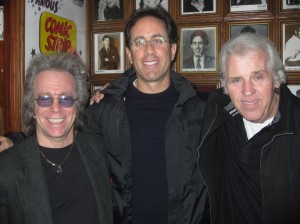 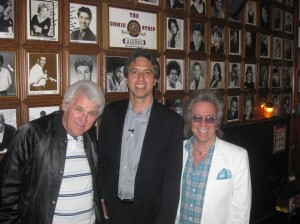 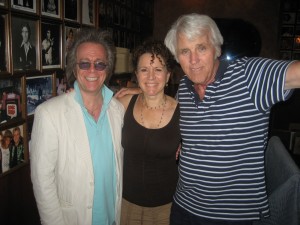 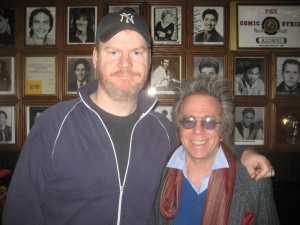 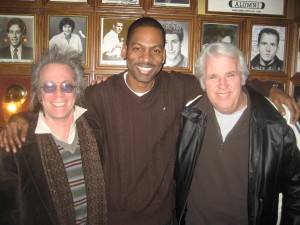 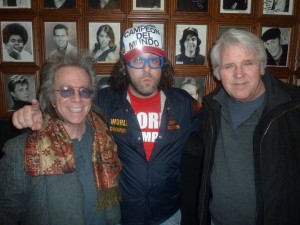