Posted by Jeffrey Gurian on November 1, 2012

The most frustrating thing about attending any film festival is not being able to see all the films you’d like to see, because there’s just too many good ones to choose from. That was the case at the Friars Club’s Fourth Annual Comedy Film Festival. 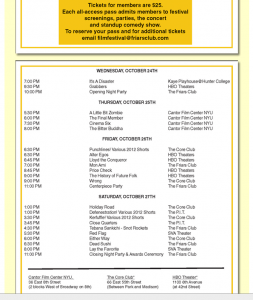 Back in 2009, Friar Charlie Prince, an entertainment lawyer in Manhattan realized the lack of a film festival geared towards comedy. He suggested it to the Board of Governors at The Friars Club, and they agreed to give him the green light, so the festival was born. The second year they had 8 films in competition. This year they had over 40.

Films, (features and shorts) were shown over four nights, to packed audiences, in six different venues: the Cantor Film Center at NYU, The Kaye Playhouse at Hunter College, The Core Club, the SVA Theatre, The HBO Theater, and The PIT.

Opening night was fun with a film titled ” It’s A Disaster” starring America Ferrera, Julia Stiles and David Cross, which could possibly be described as an apocalyptic comedy if there is such a thing! It was directed by Todd Berger, and Todd, America, and David, along with a couple of funny actors named Jeff Grace, and Kevin Brennan, were at the Q&A that followed as well as the kick-ass opening party at the legendary Friars Club, a gorgeous mansion on East 55th Street in midtowm Manhattan. 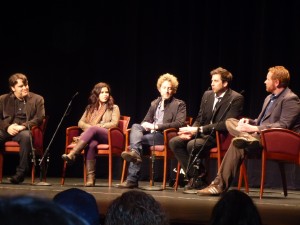 I shot some very cool video interviews with Charlie Prince, David Cross and some of the comics at The Friars CLub which you will see as soon as it’s edited!

Other highlights of the festival for me, and there were several, were seeing my old friend, widely-loved comic Eddie Pepitone immortalized in a film about him,called “The Bitter Buddha”, as well as seeing the film “Price Check” with one of my favorite actresses, indie-queen Parker Posey, and actor Brian Berebbi, who was also there for the Q&A and for the after-party, along with director Mike Walker. 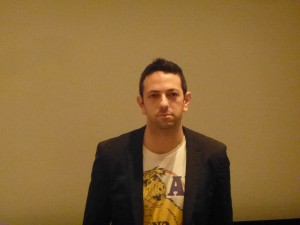 Actor/improv comic Brian (30 Rock) Berebbi, at the premiere of Price Check at the HBO Theater!

Brian played a fun role in the film and as I left the theatre, because my life usually turns into a Woody Allen movie, I fell down in the darkness, and unknowingly cut my hand. As I walked outside with my producer Rob Krieg, I saw Brian who called me over to introduce me to the film’s director Mike Walker, and producer Dolly Hall, and as I extended my hand to shake it was dripping blood.

(L-R_ Charlie Prince, Mike Walker, Dolly Hall, and Brian Berebbi on stage at the HBO Theater, for the Q&A for Price Check!

We all had a good laugh as I made my way to the Men’s Room to clean up. Fortunately it was a minor injury, but a funny visual for a film, trying to shake hands with people while you’re bleeding but trying to act very casual!

The Bitter Buddha was made by Steven Feinartz,(pronounced Fine Arts, which is about as good a name for a director as you can get! LOL.) The title is how Feinartz describes Eddie, who is often called ” the comedian’s comedian” meaning someone that other comics like to watch perform, and it was a great look into his life and what makes him tick. 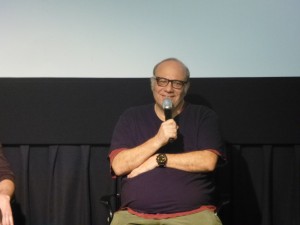 Eddie Pepitone fielding questions during the Q&A for the film about him “The Bitter Buddha”!

The scenes of Eddie with his Dad, who doesn’t get to attend many of Eddie’s shows, but who unexpectedly came out to Gotham Comedy Club to support his headlining performance there were particularly heart-warming. You could see how proud he was of his son! 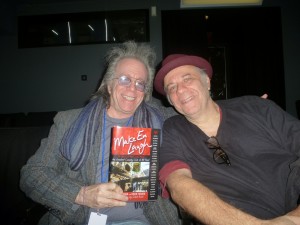 Jeffrey Gurian of Comedy Matters TV in the audience with Eddie Pepitone after his performance in “The Bitter Buddha” a doc on his life. I couldn’t resist holding up my book ” Make ‘Em Laugh” with a great intro by Chris Rock!

And it was particularly gratifying to me to see the turnout for the afterparties at The Friars CLub, and to see the club packed with so many young, creative people. That’s how it’s supposed to be. I’ve been involved with the club for so many years, and it’s great seeing the energy that Charlie and his team bring to the club.

I attended the closing party with Shoko Tamai, a very talented, and super-creative ballet dancer originally from Japan, but who performs all over the world, and is also surprisingly very funny! I’m excited that she will be doing some comedy work with me, and we are planning some fun and unusual things together! 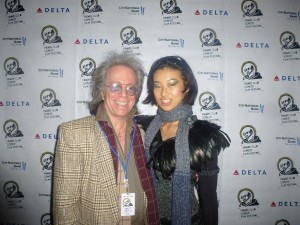 Friar Jeffrey Gurian of Comedy Matters TV, with internationally known ballet dancer Shoko Tamei, on the Step and Repeat at The Friars Club!

It was thrilling for me to be able to show her around the club, and watch her amazement at the show business history that is obvious everywhere you look in the club. There’s really no other place like The Friars Club, and it always feels good to be there. 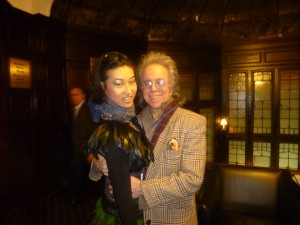