Posted by Jeffrey Gurian on September 9, 2012

I’ve known Tom Cotter for a long time and always admired his work. Not only his performance but especially his writing. It’s just so sharp and clever, and he works really clean, which in a business where so many comics are obsessed with “bathroom related material”, is a breath of fresh air, (not usually found in most bathrooms! LOLOL) 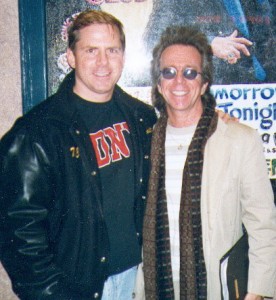 Tom Cotter with Jeffrey Gurian of Comedy Matters TV at The Comic Strip in 2003!

With all the times I’ve seen Tom perform, I still run into the room to catch his set if I know he’s going up. He’s a reliable crowd-pleaser! His lines like, ” I was the youngest in the family, but I was always beaten up by the two oldest, … Mom and Dad!” ” I used to get smacked around by these green berets in my neighborhood. Some people call them “girl scouts”, … whatever!” “The morning of my 16th birthday, the whole family tried to surprise me with a car, … but they missed!”, … make me laugh every time I hear them!(Which is not to say he’s not adding new lines all the time! Try giving a woman a compliment like that, and she’ll KILL you! “Every time I see you in that dress you look fantastic”!)

Those are just three of Tom’s jokes that helped him impress Howard Stern, Sharon Osbourne, and Howie Mandel, and pass the audition for the 7th season of the show. His material really lends itself to doing 90 second bits which is basically what you get on the show. Most comics are still adjusting the mic stand and asking people where they’re from for the first 90 seconds. Tom doesn’t fool around. He gets one laugh after the next. You can see it right here:

As a long time writer, I appreciate people who punch out the jokes. One after the other. That’s why you’re out there to tell jokes and make the audience laugh, and Tom is a master at that.

Howie Mandel gave him two “thumbs up” on camera right after his audition set, told Tom he had just become a big fan of his, and that he was confident, polished and very funny. Sharon said Tom’s performance was one laugh after the next, and “really, really spot on!”, and Howard not only thanked him for being on the show but used the word “excellent” to describe his performance!

Since that time, they have grown to love him as has the audience, and you can see they’re really rooting for him to win.

Tom is married to the very funny, and very pretty comic Kerri Louise and they have 3 little kids. I remember when they were shooting their show for the WE Channel called “Two Funny” about the lives of two married stand-up comics who have baby twins. They were shooting an episode at the Just for Laughs Festival in Montreal, which is the biggest comedy festival in the world. (I just got back from there last month, where I shot 40 interviews for Comedy Matters TV, including one with Tom Cotter which you can see below!)

Anyway, I was chasing them all over to get a photo with the help of their manager Peter Rosegarten from The Conversation Company, but I could never get the two of them together in the same place at the same time! Finally I just gave up, and as I was leaving, and waiting for my car to take me to the airport, who pulls up in their car but Tom, Kerri, and the twins Cameron and Harrison. They got out of the car and I got my photo, and I just spent the last two hours searching for it on my computer to no avail!

I found the column from September of ’05, but I can’t find the photo! However I do have the video I just shot with Tom up in Montreal where I was the official videographer this year for my Comedy Matters TV! Check it out right here:

Those twins are 7 years old now and they need their Dad to win America’s Got Talent, so he can keep them in the style they need to be kept! And that goes for Kerri Louise as well, whose nick-name according to Tom used to be “Comic Relief”! (LOL) 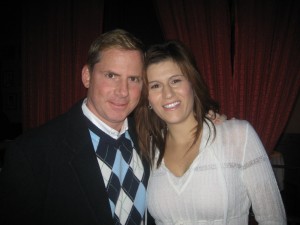 Tom Cotter and the lovely Kerri Louise at Danny Aiello’s comedy room Danny’s Upstairs, back in 2007! You’d never know she had 3 kids, right?

In order to get into the finals, Tom took the “ballsy” move of letting Howie Mandel choose the category of his material from a list. Howie chose “College” and Tom went on to destroy the crowd with his killer set!

So the finals begin this Wednesday, Sept. 12th, on NBC, at 9 P.M. New York time, 8 P.M. Central time(whatever that is! LOL), and the results show is the next night on Thursday, 9/13. So make sure to vote for Tom, and let a true comedic talent win. He’s not only funny, but the nicest guy you’d ever wanna meet!

The world needs more laughs and Tom is the guy that can bring it!