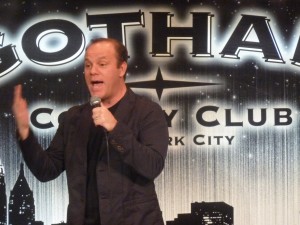 It was no surprise that Tom Papa sold out all of his shows at Gotham Comedy Club. People love Tom Papa. His comedy is very audience friendly, and it comes across that he’s a nice guy. I had seen him fairly recently when he did a killer spot on the third anniversary of Anthony Anderson’s Mixtape Comedy Show, which is the third Sunday of every month at Gotham, and we did a cool little video interview for Comedy Matters TV. Check that out here!

This night, Tom was headlining and Jim Mendrinos was the host. Jimmy is a fantastic host and really knows how to keep an audience’s energy level high. He won’t accept anything less and knows how to whip them into shape if he has to. I produced a fundraiser for Diabetes last year and Jimmy was my MC as well. He and I both lost our Dads to Diabetes.

Mark Normand, a young comic was excited about opening for Tom. He had lots of funny lines but the one that stuck out for me was, “I moved in with a girl. We had sex in every room of the apartment. Unfortunately it was a studio.” It sounded like something I would write when I wrote for Rodney Dangerfield, which made me like it even more! (LOL) 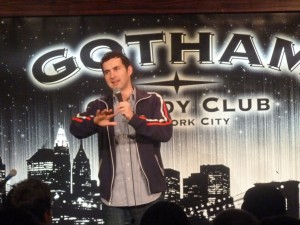 Sue Costello came up next. Sue is so pretty, you’d never know she had a lazy eye as a kid and a stupid bowl cut hairdo, which is how she describes herself growing up. She certainly grew out of it, cause she looks great on stage, and the crowd loved her! 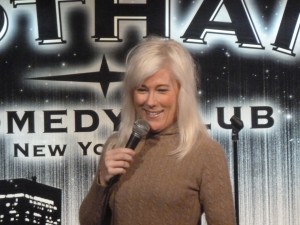 The beautiful, sexy, fair skinned, and funny Sue Costello onstage at Gotham! You’d never know she once had a lazy eye!

Tom had a lot of material I hadn’t heard before, and it was great. He says, “Reading about the economy is like drinking Jagermeister. Two pages in I’m unconscious on the floor, and I wake up with no pants on.”

On the fact that no one really feels like they fit in, he describes it feeling like “Life is like a pair of skinny jeans, and you’re a big, fat ass.”

He also does a lot of very physical humor, and moves around a lot on stage, which adds to the energy of what he’s saying.

I like when he talks about how boring adults are, and imitates the lame things some guys say. e.g ” How are you?” “Still a million bucks short of being a millionaire!” And he uses such an obnoxious voice. It’s perfect!

He has two daughters, 6 and 9 and even when he takes a simple concept like putting a little girl’s hair into a bun before they go to dancing school, he works the audience into hysterics.

I can see why Jerry Seinfeld takes him on the road as his opening act, and chose him to host The Marriage Ref on NBC!