Tony Rock Home At The Strip

When Tony Rock comes to town he always makes sure to hang out at The Comic Strip. He comes in to visit Richie Tienken, the owner and founder of the club, who was his first manager. 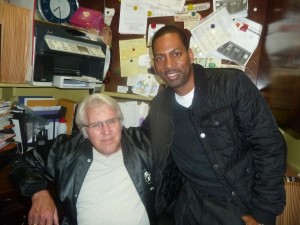 Tony Rock with his first manager Richie Tienken, owner and founder of The Comic Strip!

It’s where he got started, back in 1998 with his cousin Sherrod Small. They started performing the exact same day, and when I did their interviews for the book “Make ‘Em Laugh- 35 Years of The Comic Strip, The Greatest Comedy Club Of All Time”, they both answered all their questions in the “we” form. It was both funny and touching at the same time.

Tony stops by and usually surprises the audience by doing a guest spot, and then hangs out to check up on the progress of his little brother Jordan Rock who hosts the latenight shows on Wed. and Thursday evenings. It’s really great to see how the audience responds to Tony. They really love him. 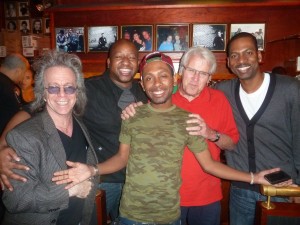 A fun night at The Strip when Tony Rock comes to visit! (L-R) Jeffrey Gurian, Jordan Rock being held in place by Richie Tienken, and in the back Sherrod Small and Tony Rock!

When I co-produced a show starring Kevin Hart back in 2010, Tony was the featured performer. Needless to say it was an amazing show! (And if it’s needless to say, then why did I say it???) 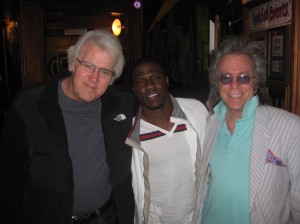 Tony’s been in quite a few films lately, the most recent being Think Like A Man, with Steve Harvey, Kevin Hart, and Taraji P. Henson, but the real excitement is coming up for Tony on July 9th when he kicks off hosting the new Jamie Foxx produced show ” Apollo Live” on Centric, which is an updated version of “Showtime At The Apollo”!

Everyone’s excited about that, and Comedy Matters TV will be there for sure to get a fun interview with Tony, and hopefully Jamie as well!