Today is the day we’ve all been waiting for.  You’d basically have to be from a small village in Bulgaria, living next to a stream not to know that Jimmy Fallon is bringing The Tonight Show back to New York, starting tonight and it will change entertainment completely!

For the first time in 42 years since Johnny Carson took the show out to Burbank, The Tonight Show will have it’s home at 30 Rock, along with SNL and Late Night with Seth Meyers, who is replacing Jimmy Fallon in that spot.  Jimmy’s last night on Late Night was Feb. 7th. 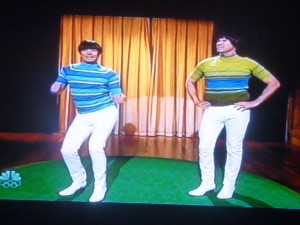 Jimmy Fallon and Will Ferrell doing a song about their tight pants!

Never before has there been a late night host as talented as Jimmy.  Many were funny, and many did characters and different types of “shtick”, but NOBODY does as many things as Jimmy Fallon.  First he’s only 39 and appeals to a younger demographic.  But besides doing stand-up, he also sings, dances, (which he claimed in an interview he did with me that he doesn’t dance, but anyone who’s seen him move on the show will beg to differ), plays instruments, (especially the guitar!), does impressions, and is the right age to bond with most of his popular guests like Justin Timberlake, Tom Cruise, Brad Pitt with whom he yodeled in a video, and Bruce Springsteen who he dressed up as and sang a duet with.  He even  got Jerry Seinfeld and Billy Crystal to dress up as old time baseball players! 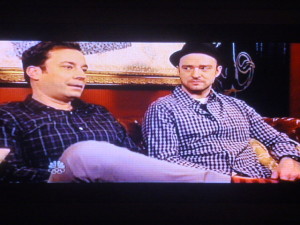 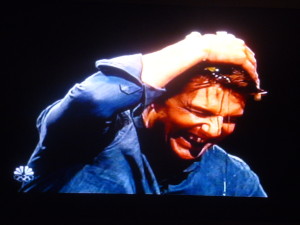 Jerry Seinfeld, not sure who this guy is, and Billy Crystal as old time baseball players

Jimmy’s “Tonight Show  starring Jimmy Fallon”, will be broadcast from Studio 6B in 30 Rock, Monday through Friday at 11:34, except for tonight when it will start a few minutes later due to The Olympics! Among his first guests will be Will Smith and U2.  Can’t wait to hear U2 jamming with The Roots!

Later on in the week he’s planning on having Justin Timberlake who was on his recent “Best Of” special on NBC doing a “History of Rap” duet with Jimmy, Lady Gaga, and Michelle Obama, who also appeared in that special.  And what a special it was.  Not only does he have the hugest guests in the world, but he does fun things with them.

Like when he got Pres. Obama to actually do “Slow Jam the News”, a bit he does where they do the news to Barry White-like music in the background.  C’mon, … getting the President of the United States on your show doing comedy?  Talk about “beyond your wildest dreams!”  Who gets the Pres. to do comedy on their show?  Only Jimmy Fallon! 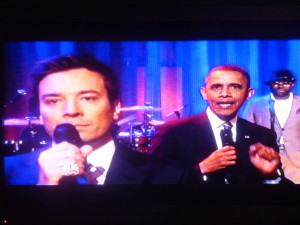 Pres. Barack Obama “slow-jamming the news” with Jimmy Fallon, and The Roots!

He’s had Mick Jagger, Mariah Carey, and Robin Thicke, he’s come out dressed as David Bowie, and Bob Dylan  and imitated both, (his Dylan is better than Dylan, and he did it during an interview he did with me as well!), he’s arm-wrestled with Jason Statham, he had Tom Cruise crack eggs on his own head, and dressed up like Bruce Springsteen and actually did a duet with the real Springsteen, side by side on his show. 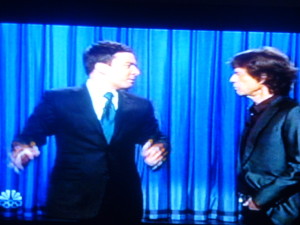 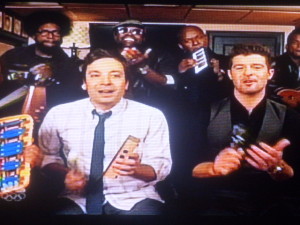 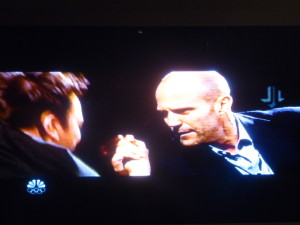 And as far as arm-wrestling with Jason Statham goes, I can attest to how strong Jimmy is physically.   One night when we were hanging out he insisted on picking me up, and not that I’m so heavy, but when I resisted as I tend to do when people try and lift me off the ground, I could feel the strength in his arms. The dude works out!

Having Jimmy in New York will give New York’s comedic talent more of a shot at getting on the show and many more big stars from LA will be coming to New York to be on the show.

What’s also special about Jimmy is that he’s not out to make his guests uncomfortable or as was said in a recent New York Mag article  of 2/10/14, ” he doesn’t try to expose his guests’ hypocrisy like Stewart or Colbert, and in contrast to Letterman, he actually watches his guests’ movies, listens to their music and geeks out endearingly in front of them.”

That “niceness” comes easily for Jimmy.  He’s a genuinely nice guy!  I remember when I was shooting an interview with him backstage at Gotham Comedy Club, and my D.P wasn’t able to make it.  I was so nervous to tell him I didn’t have anyone to work my camera, and when I finally got up the nerve to tell him as we sat in the green room, he said ” Don’t worry about it, my wife Nancy is a producer and she’ll shoot it for us”, … and she did! 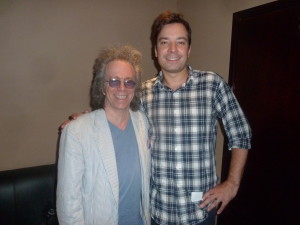 The last time I saw Jimmy I was performing in a show at The Players Club, hosted by the inimitable Brute Force who hosts a monthly show there, and Jimmy dropped by to see Brute.  He was shocked to see me, and we all hung out at the bar after the show.  I think he was playing a song on the piano and then turned to me and asked me to play something! 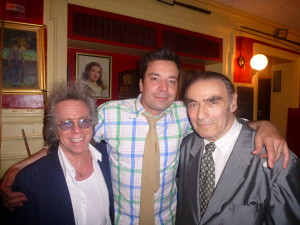 Jeffrey Gurian, Jimmy Fallon and Brute Force hanging out at The Players Club!

I think I surprised him by playing a little something I remembered from my 10 years of taking lessons when I was a kid.   Jimmy sat on the pool table behind me and just listened.  Then we all just hung out and had fun for the next couple of hours. 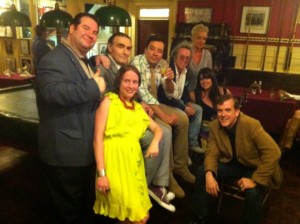 Jimmy Fallon hanging out with Jeffrey Gurian, and a whole group of people at The Players Club, June 2013!

Anyway, I’ll be staying home tonight to watch Jimmy inaugurate his show.  I could TIVO it, but that wouldn’t be as fun as seeing it live and in person.  I’ve never really had the time to watch late night TV, but I plan to be watching Jimmy on a constant basis!  I hope you will too!