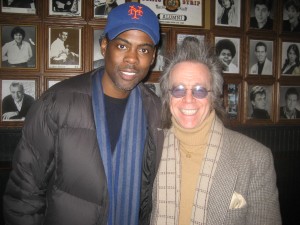 Jeffrey Gurian of Comedy Matters with Chris Rock at The Comic Strip! 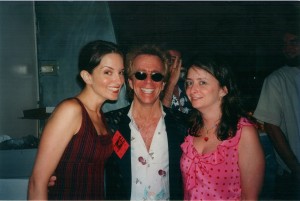 Beginning on Tuesday, November 15th, 2011, relatively unknown comedians from around the world will be able to submit videos of themselves performing their best three minutes of stand-up comedy via a YouTube or Vimeo link (no file attachments, please!) to Gurian at [email protected] No entry fee is required, all contestants need to do to be considered is ‘LIKE’ Jeffrey Gurian’s Comedy Matters on Facebook and send in their best 3 minutes. 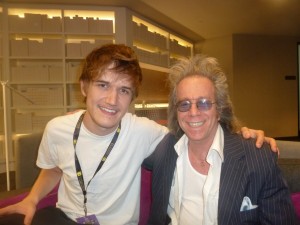 Jeffrey Gurian of Comedy Matters with Bo Burnham at the Just for Laughs Festival in Montreal!

Jeffrey will watch all the submissions and choose his 10 favorites to be finalists. These 10 finalist videos will be posted on the Jeffrey Gurian’s Comedy Matters Facebook page where fans can vote by ‘LIKE’ing the page and then ‘LIKE’ing their favorite comedian video. At the end of the voting period, the comedian who has the most ‘LIKES’ wins. 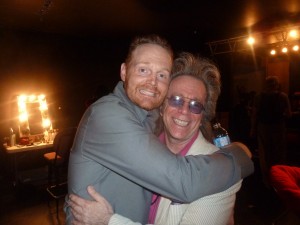 Jeffrey Gurian of Comedy Matters on the receiving end of a big bearhug from Bill Burr! 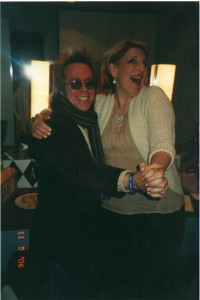 Jeffrey Gurian of Comedy Matters dancing with Lisa Lampanelli as part of his ” Dancing With Comedians” series!

If you’d like more information about Jeffrey Gurian’s Comedian Who Matters Contest, or to schedule an interview with Jeffrey Gurian, please contact his assistant, Corinne Fisher, at 908-265-2087 or via E-mail at [email protected] 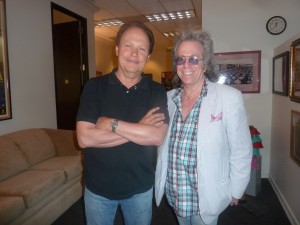 Jeffrey Gurian of Comedy Matters out in LA, with Billy Crystal who will be hosting this year’s Oscars ceremony!

It was the 29th annual Just For Laughs Festival in Montreal and as you might imagine, everyone in comedy was there. I literally shot 20 video interviews with people like Garry Shandling, Ken Jeong, Bo Burnham, Bill Burr, Paul Provenza, Kenny Hotz, Russell Peters, Steve Levitan who created Modern Family and won an award for Best Comedy Writer, Amy Schumer and Anthony Jeselnik and not only people LIKE those people, but the actual people themselves! ( LOL – Do I really need the LOL or would you have known??? ) 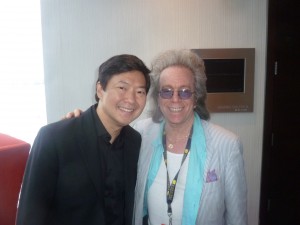 Jeffrey Gurian of Comedy Matters TV with Ken Jeong from The Hangover movies, in Montreal at the Just For Laughs Festival. Ken had just won the award for Breakout Comedy Star of the Year, at the Comedy Confference!

I’ve been coming up to the festival probably for well over 20 years, and for many of those years there was absolutely nothing scheduled for during the day! In recent years they created something called The Comedy Conference which is FANTASTIC! It’s a chance to meet and interact with people doing things in comedy, on the internet making web series, short films, and attending conferences where people speak on their particular specialty. You get to listen to and meet the movers and shakers in the comedy world, including people from You Tube, Google, Barely Political,The Onion, and Rob Barnett’s “My Damn Channel.”

This year at a special luncheon, awards were given to Garry Shandling, Ken Jeong, Steve Levitan, and Louis CK among others. I interviewed several of them, which you can see right here.

I started meeting people the moment I got off the plane with my trusty DP Sean Mannion. We shared a shuttle to the Hyatt Regency Hotel, which is the home base of the festival, with Kurt Braunohler, (who I mistakenly wrote about previously as “Braunholer”, a great observation if I was Roasting him!), then walked into the hotel and ran right into Russell Peters, who finalized my plans to come and see him that night, then ran into Kenny Hotz on the way to my room, who is the only Canadian talent to have two shows on American TV at the same time, and as soon as I changed and got my camera ready I ran into Bo Burnham, and did my first interview of the weekend. 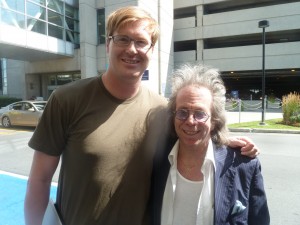 Jeffrey Gurian with Kurt Braunohler at the airport in Montreal on the way to the Hyatt Regency Hotel!

See Kenny Hotz’s video interview right here. Kenny is a great guy and has so many loyal fans. Whatever I post about him goes through the roof! 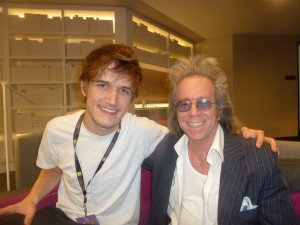 Jeffrey Gurian of Comedy Matters TV with a self-described "disheveled Bo Burnham" at the Just for Laughs Festival!

Everything Bo does goes viral. Bo is grateful that antibiotics have no effect on a virus, so there is virtually no cure for what he does! (LOL) He was performing on the Amp’ed show along with Reggie Watts and others who mix comedy and music, and we had a cool, fun interview. He introduced himself on camera as “the disheveled Bo Burnham” as is everyone in Montreal. There’s not much “stylin'” in the comedy world. People are just chillin’ and having a good time networking, and meeting their peers! 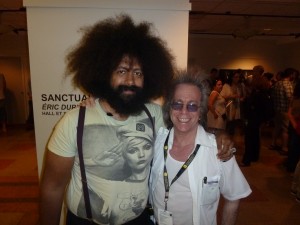 At Russell’s show that night called “Best Night Ever” I went backstage with Russell for some exclusive footage, in which I actually got him dancing to some hip-hop beats, and he looked great in a custom gray striped suit and brand new white sneakers! That video is down towards the bottom of this column! 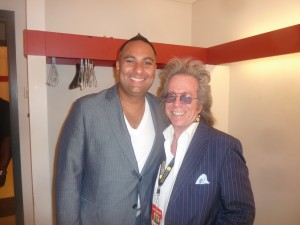 Jeffrey Gurian of Comedy Matters TV backstage with Russell Peters, in his custom suit, at his show in Montreal!

I also got to interview Russell backstage at Paul Provenza’s taping of The Green Room for Showtime. Paul taped two shows for the second season of his hit show, and he and Barbara Romen his co-producer, along with Christopher Barrett made sure I got to see whoever I needed to see. 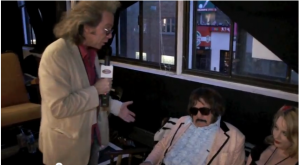 We were in “the green room of The Green Room” and I interviewed the legendary Tony Clifton, Andy Kaufman’s best friend, who was kind enough to introduce me to his date’s breasts, and watched intently as I interviewed them. They were kind of quiet on camera, but off camera they wouldn’t shut up! 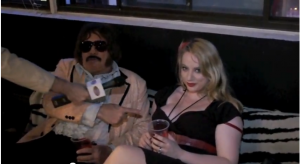 I also spoke to Bill Burr, who laughingly chastised me for mentioning Tony Clifton and Bob Zmuda in the same sentence, and then I interviewed Colin Quinn, who was ticked off that they weren’t told what they were going to talk about so no one could prepare but Paul! 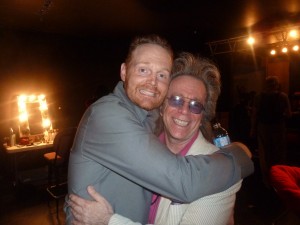 Jeffrey Gurian of Comedy Matters TV on the receiving end of a bear-hug from an affectionate Bill Burr!

Watch all that in the Bill Burr video interview right here:

I missed Eddie Izzard at The Green Room but caught up with him at the airport when we shared a flight back home to New York. He was doing a guest appearance on CBS’s The Good Wife! 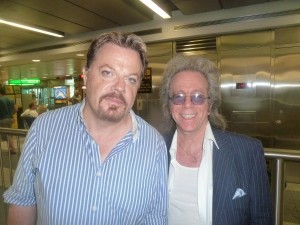 Jeffrey Gurian and Eddie Izzard waiting to fly back to New York after the Just For Laughs Festival in Montreal!

I caught up with SNL’s John Mulaney, who is also Nick Kroll’s writing partner, and we had a fun interview after the Variety party. I also got to see John taping his really funny Comedy Central special, “John Mulaney Live”, a short time afterwards back in New York at NYU’s Skirball Center, where Comedy Central tapes many of their specials. 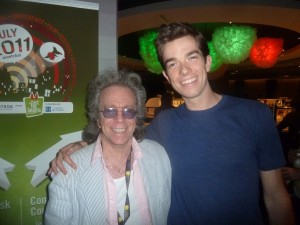 Jeffrey Gurian with SNL's John Mulaney after the Variety party at the Just for Laughs Festival in Montreal!

John swears he and Nick Kroll will not make another “Oh Hello” video without having me in it. That probably means he’s not going to be making any more “Oh Hello” videos! (LOL)

Also caught up with two rising young stars Amy Schumer and Anthony Jeselnik, bot of whom you will see this Monday on Comedy Central’s Roast of Charlie Sheen!

But I would have to say my most fun and rewarding interview was with Andy Nulman, the head of Just For Laughs and one of the founders of the festival 29 years ago. He had left for a while to run his telecommunications company which he recently sold for about 15 or 20 dollars, ( add about a hundred million to that! ), and is now back running the show. 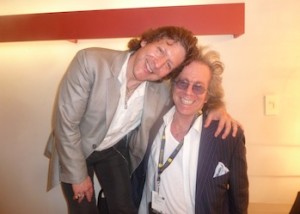 Jeffrey Gurian with an absolutely HUGE Andy Nulman who had to crouch down to even be seen in the photo!

I got a hold of him backstage at Russell Peters show where I also ran into my old friends Alan Schwartz, and “Big Bill” who run security for the festival, and who range in size from about 6’6” to somewhere near 7’ tall. I have an amazing photo of me somewhere suspended between them hanging from their shoulders. It’s really funny, and I just found it so here it is! 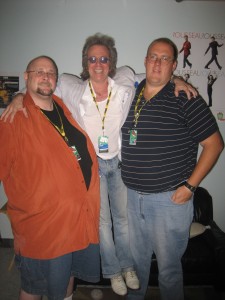 (L-R) Jeffrey Gurian of Comedy Matters TV suspended between Alan Schwartz, and Bill Bill backstage at one of the galas of the Just For Laughs Festival in Montreal! ( They both know they can call me in case anyone bothers them!)

This is the really fun video of Russell Peters getting down backstage at his show in Montreal!

Anyway, Andy gave me this fantastic interview in which he says, “ If I wanna know what went on at my own festival, I read Jeffrey Gurian’s Comedy Matters, because he knows everyone, he covers everything, plus he really gives a s**t! That’s why when I say ‘This is Andy Nulman and you’re watching Comedy Matters’, it really means something!”

The video you see here is a compilation of everything that went on at JFL 2011! It’s all right here in the video so check it out!!!