Rich Vos and Bonnie McFarlane undertook a huge project and came out with a fantastic result. They decided to make a film examining the statement made from time to time by journalists like Christopher Hitchens, and well known comics like Jerry Lewis and Adam Carolla that women aren’t funny. 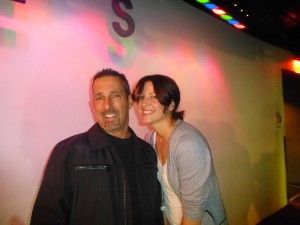 Producer Rich Vos and director Bonnie McFarlane at Carolines for the debut of their film ” Women Aren’t Funny!”

This of course is a big generality, almost like saying “Men aren’t fashionable!” A lot of men are slobs, but some men are fashionable, and it stands to reason that women can be funny. I know that Bonnie Macfarlane is funny. I love watching her work. She’s sharp and can hold her own with men who try and overpower her comedically. I’ve seen her do it several times!

I guess that comes from being married to Rich Vos. And he should be thanking G-d for that every day, (and I think he does!) (LOLOL)

Rich said he called in every favor he ever had, and got a very impressive list of people in the comedy business to offer their thoughts on whether women can be funny or not! Colin Quinn, who was the MC at the premiere of the film at Carolines on Broadway, joked that if that was every favor he ever had he should be ashamed of himself! 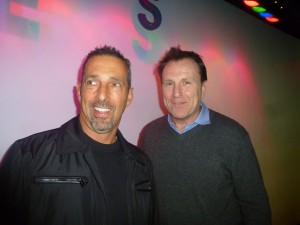 Rich Vos, whose attention span is so short-lived he can’t even look at the camera, and Colin Quinn at Carolines for “Women Aren’t Funny!”

To Rich’s credit, he even put up his own money to do this project. That’s when you know someone really believes in their work.

Asking women who make their living being funny if women can be funny is a little touchy, and one male comic was honest enough to say that a lot of guys aren’t funny either. To verify that all you have to do is go to as many shows as I go to and that will be obvious.

So they made this documentary film called “Women Aren’t Funny” and debuted it as part of Caroline Hirsch’s NY Comedy Festival to a packed house.

As Colin took the stage to make his opening remarks, he wondered aloud to the audience several times, what he was doing there! 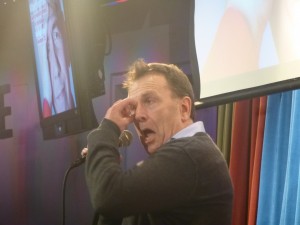 Colin Quinn said after thinking it over he’d rather remove his eye than MC this event for Rich! Interesting option!

He also appeared in the film as did so many people like Rosie O’Donnell, Sarah Silverman, Adam Carolla, Patrice Oneal, Judy Gold, Jim Norton, Joan Rivers, Artie Lange, Maria Bamford,Michael Ian Black, Tom Arnold, Chelsea Peretti, and literally a Who’s Who in comedy, which is an admirable feat! 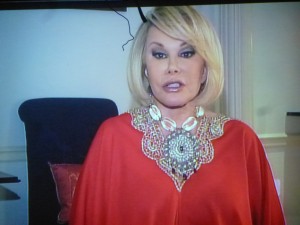 Joan Rivers still looking sexy and proving that women can be funny! 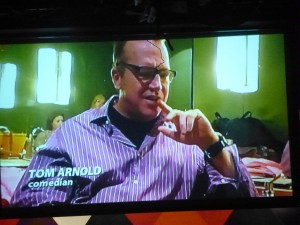 Tom Arnold, once married to Roseanne, weighing in on whether women can be funny! 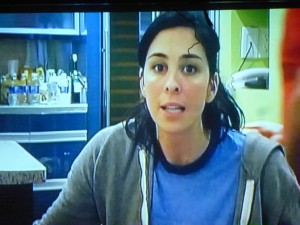 Sarah Silverman onscreen discussing her point of view on women and humor! 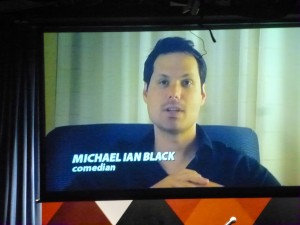 Michael Ian Black onscreen at Carolines, on whether women can be funny! 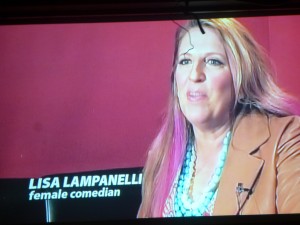 Lisa Lampanelli onscreen, … another woman proving that women can be funny!

I had to do that twice in the last few years and I can attest to how hard it is to get so many stars lined up to be in your project. In my book “Filthy, Funny, and Totally Offensive”, based on my writings for the Friars Roasts, which was supposed to be a collection of celebs favorite nasty jokes, I got 250 celebs like Drew Carey, Jason Alexander, and Jeff Garlin, to share pure filth with me, and my pal Paul Provenza wrote the intro. After directing The Aristocrats, I think he knows a thing or two about filth!

In my latest book “Make ‘Em Laugh” with an intro by Chris Rock, it took three years to get all of the in-depth interviews with people like Chris, Seinfeld, Ray Romano, Susie Essman, Colin Quinn, Lewis Black, Judah Friedlander, Billy Crystal, Larry Miller and so many more.

So I totally appreciate how hard it must have been to get all the people that were in this film and get them to offer their personal insight into this question.

They shot all over, and Bonnie and Rich even had footage of both of them on Opie and Anthony where Rich is a mainstay, and where in a touching scene he tried to convince Bonnie that he loved her! 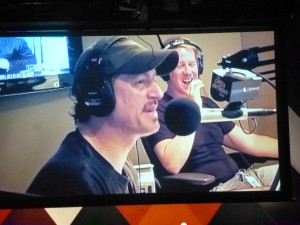 (L-R) Anthony and Opie from “Opie and Anthony” on SiriusXM having some laughs with Rich Vos and Bonnie McFarlane!

Showing emotion is not that easy for Rich, but he tries his best with Bonnie and their adorable daughter Reina who he called out on stage, as Colin said, whenever he felt he needed more of the audience’s support! Reina was his life-saver! 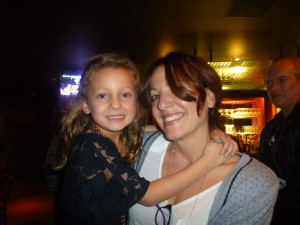 Bonnie McFarlane and daughter Reina after the premiere of ” Women Aren’t Funny” at Carolines!

Bonnie opens her heart in this film, almost as if she’s wondering if she herself is funny. In one scene she even dresses as a guy, with a full beard and goes onstage at The Comic Strip to audition. It must have been one of the rare nights I wasn’t there, because I would have loved to see that in person. 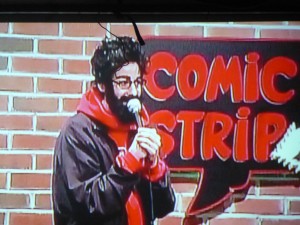 Bonnie McFarlane onstage at The Comic Strip in full beard as if she was a hipster comic from Brooklyn!

Afterwards in an emotional moment, she kind of dissolves in tears, and Rich is there to console her, looking to the rest of the word as if he’s kissing a guy with a full beard. It was funny and moving at the same time. 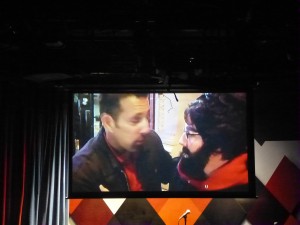 Rich Vos in an attempt to be supportive, about to kiss what appears to be a guy in a beard!

From a psychological point of view, I have my own opinion about women and comedy. Obviously women can be funny, but as a society we don’t like to laugh at women because we’re taught to respect women. So when they try and denigrate themselves, which men do very easily, or do self-deprecating humor, the audience may not be as willing to go along for the ride.

Men are programmed to make fools of themselves. We do it effortlessly. But from the time women are little girls they’re groomed to be proper, and we’re taught that it’s not polite to make fun of girls or to laugh at them. I think that carries over to when women are on the stage.

It’s possible that the audience doesn’t like to see women talk about themselves in an unflattering way. It may make some people uncomfortable. We’re taught to respect women, and to try and not judge people by their appearance.

The audience may also find it hard to believe that attractive female comedians may have a hard time finding a date, which is a common comedic premise. It’s one of the reasons that women used to play down their looks when they went up to perform, although today there are several attractive women who go onstage looking very “hot”! I will not name them. They know who they are! (LOL)

I will however say that Lynn Koplitz joined Bonnie and Rich for the Q&A that followed the film, and both she and Bonnie are good examples of the above! 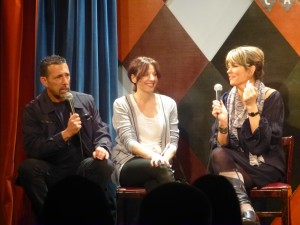 But in women’s determination to be equal, which I don’t understand because they’re already superior,(LOL), they seem to be in competition with men sometimes on who can be more “gross”, as evidenced in recent films like
“Bridesmaids”.

Men are naturally gross. They don’t even have to try. Why women would want equality in that area of life is beyond me! (LOL)

Anyway, all that being said, this is a film that needs to be seen, so if you get the opportunity make sure to go and see it. Hopefully it will get distribution and get a theatrical release, but Rich and Bonnie should be very proud of what they accomplished, … and I don’t only mean Reina! (LOLOL)

I was covering the red carpet of the 2nd annual Comedy Central Comedy Awards Show 2012, and it was a star-studded event, with comedy legends like Robin Williams and Don Rickles, plus acting legends like Robert DeNiro, who presented Don Rickles with the Johnny Carson Award for Comedic Excellence.

From Julie Klausner who hosted the red carpet to Colin Quinn, John Oliver, Kristen Schaal, Randall from The Honeybadger film that got 43 million hits, The Gregory Brothers, (including Sarah, the hottest of the Gregory Brothers), Jessica Williams, the new “hot cutie”,and youngest correspondent on The Daily Show, Jim O’Heir from Parks and Recreation, Hannibal Buress, and so many more, plus private scenes from the press room, it’s all here in the following video!

So check it out right here:

Louis CK was the evening’s big winner with 4 trophies, including the awards for Best Sketch/Alternative Series,Best Stand-Up Tour and Best Comedy Special of the Year. Robin Williams was presented with the Stand-Up Icon Award by Patton Oswalt, and Don Rickles received the Johnny Carson Award for Comedic Excellence from Robert DeNiro.