Out of all the amazing shows and panels at this year’s 31st annual Just for Laughs Festival, I think the most exciting event was the JFL Awards Show. 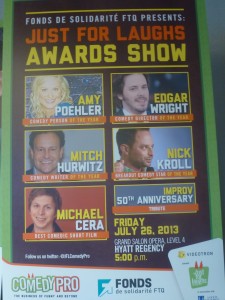 The line-up of talent was fantastic. And I would be remiss for not thanking certain people who made my attendance at this year’s festival even more meaningful than ever, so special thanks to Paul Ronca the Director of the Comedy Pro-Conference, Zoe Friedman the Artistic Director of The Awards Show, Olivia Benaroche the Industry Coordinator and my Guardian Angel, and Emily Shore my other Guardian Angel borrowed from Andy Nulman, Pres. of JFL. Thank you all sincerely!

So the Award Show was spectacular. Amy Poehler received the Comedy Person of the Year Award, presented to her by Seth Meyers. Interviews with both of them will follow very soon, in a separate Comedy Matters post.

Nick Kroll received the Breakout Comedy Star of the Year Award and it was presented to him by his old friend John Mulaney, which was a very meaningful experience for both of them. 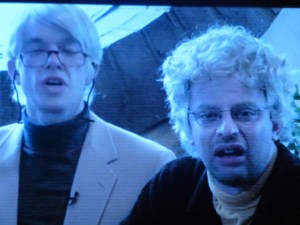 Nick Kroll and John Mulaney in their personnaes as George St. Geegland (L) and Gil Faison! 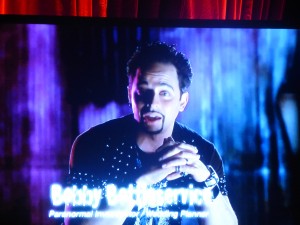 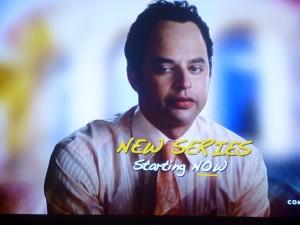 In a later interview alone with Nick, outside of the Variety party for the Top 10 Comics To Watch, he said something to the effect that John was a funny guy with a lot of potential, as if he was a newcomer! Then he busted out laughing! You’ll see it in the video when it’s finished being edited.

The hilarious Michael Cera, who takes nerdiness to new heights in most of his Judd Apatow helmed films and who is back on TV in the resurrected Arrested Development now on Netflix, won an award for Best Comedic Short Film for his 16 minute short, Brazzaville Teen-Ager. It was presented to him by Sarah Silverman who did something so funny on the red carpet. 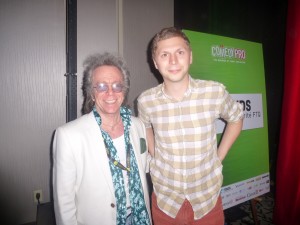 Jeffrey Gurian of Comedy Matters TV on the red carpet of the JFL Awards with winner of Best Short Comedy Film, Michael Cera!

I was positioned at the end of the red carpet where I often prefer to be so that people have time to talk to me and no one else is waiting. That works except when the event is running behind and the PR people rush the celebs along. But in this case it worked out fine.

I was in the middle of interviewing Michael Cera, and discussing our mutual friendship with the wild and wooly Kenny Hotz, when Michael asked if Kenny was what he was smelling. 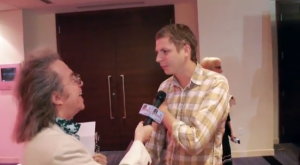 A few seconds later with no pre-planning, strictly by coincidence, Nick Kroll came over and started sniffing Michael. Nick asked him if he uses fabric softener because he told him he smelled great. 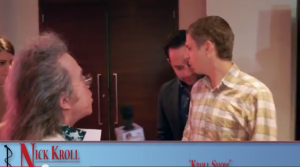 Michael left and I continued interviewing Nick, when right in the middle, one of my all time favorites, the incredibly talented and beautiful Sarah Silverman jumped in and said she had skipped all the other press people to come and talk to me. Sarah has the most amazing smile! 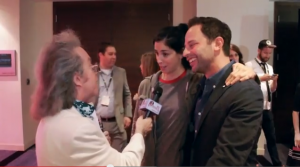 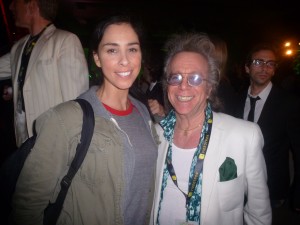 Then she and Nick double-teamed me, and wound up interviewing me, and evaluating my outfit! It was very funny because Sarah was wearing such an unusual outfit, like a hoodie on top with a T-shirt, and a very hot lingerie looking combo from the waist down, with boots! 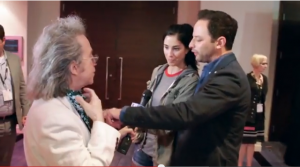 Sarah Silverman and Nick Kroll evaluating the outfit worn by Jeffrey Gurian of Comedy Matters TV on the red carpet of the JFL Comedy Awards! 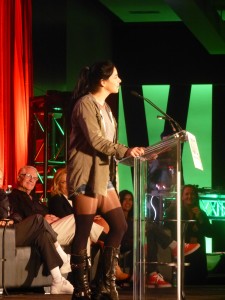 Sarah Silverman presenting the award to Michael Cera in her sexy thigh highs and boots, topped off with a T-shirt and hoodie!

It was hysterical and you can see it right here!

I shot 32 interviews over the four days I was up there with people like Amy Poehler, Seth Myers, Judah Friedlander, Paul Provenza, Colin Quinn, Bo Burnham, about 26 more, and we’ll be rolling them out as they’re done, so keep your eyes on my Comedy Matters TV You Tube channel at http://www.youtube.com/guriannewsnetwork, and PLEASE SUBSCRIBE!